Witnessing a ‘cloud inversion’ can be one of the most fascinating views a person can see. Clouds roll along the valleys like ocean waves, and create swirls and curls as they flow up and over higher mountain peaks.

The so called cloud inversion is technically an inversion of temperature, meaning that the valleys were actually cooler than the peak I was standing on at Beacon Heights. This is opposite of how the temperatures would normally be, which should be cooler the higher up the mountain you go. A previous day of rain is a good way to ensure a couple of the conditions (moisture and cold air) exist for the temperature inversion. A lack of wind and clear-ish skies above the valley clouds can also help create the full experience. The best way to see this is to go to mountaintops during these conditions during the Spring and Fall…and it may take more than a few attempts for all of the conditions to come together just right.

Most of the images and video are from Beacon Heights along the Blue Ridge Parkway near Grandfather Mountain. I captured these recently during sunrise, and  experienced a much thicker cloud inversion than expected.  Check out the short time-lapse video below the pictures to see the clouds move fluid like waves!

Sunrise at Beacon Heights along the Blue Ridge Parkway in North Carolina, during a sunrise with a valley full of clouds, often known as a ‘cloud inversion’

As the day progressed, lower clouds still hung slightly above the mountain peaks 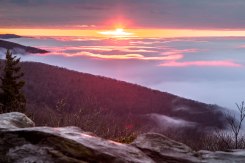 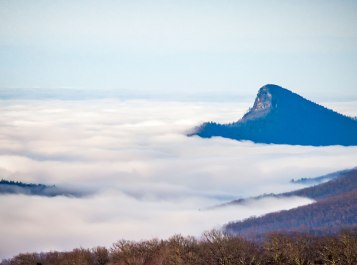 Table Rock sits above the clouds during sunrise. Table Rock is part of Linville Gorge, and is one of the most unique and recognizable peaks in North Carolina.

Panorama of the cloud inversion at Beacon Heights