The stars really shine in Texas.

This is what I have been figuring out, after spending my whole life living in North Carolina.  Humidity and clouds in NC due to its proximity to the Atlantic Ocean, combined with light pollution, make for fewer opportunities and locations to photograph the milky way.  Thankfully I am out in Texas and working with photographer Jason Weingart as his intern.  This has involved a whole lot of time trying to photograph the night sky recently, in preparation for an upcoming art festival that Jason will be in (Red Poppy Festival, https://poppy.georgetown.org/).

The viewing conditions were good, and we went out on April 11 to look for some good foregrounds.  We ended up setting up our cameras at an old farmstead at around 3:30 AM.  After walking around and looking at perspectives, we decided keep all four buildings in the picture.  I then preceded to take a panorama.. 5 for the foreground, 5 for the sky, and 4 separate exposures to bring out the buildings using a flash.
Here is the end result: 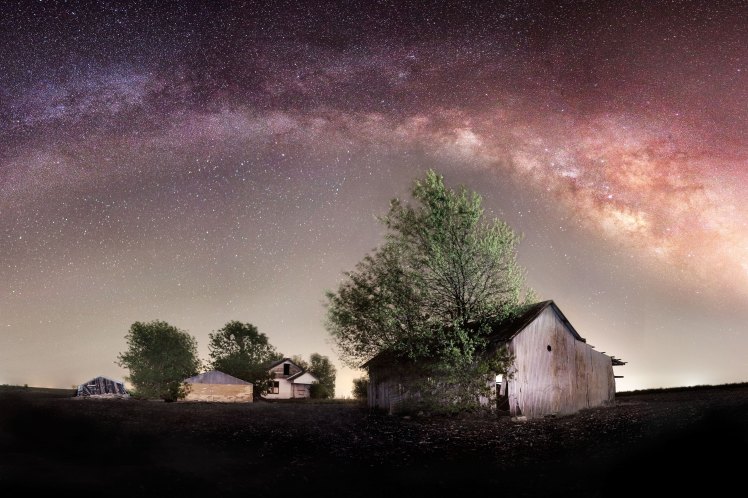 I also wanted to try to find a good location to photograph the Austin, TX skyline.  As it turns out, there is a great viewing location along the Colorado River at a place called Zilker Park.  A cement walkway parallels the river, and makes it almost too easy to setup the tripod and get a nice picture.  I plan on going back to shoot when there are intense clouds, but for now I am sticking with a nice reflection of the buildings.  Also, there are a lot of swan’s on this section of the river, and one floated directly into my frame.
Here is the picture, taken right after sunset(click to enlarge):

Like I said, its been a little busy.  This is fortunate though, because I really love photography.

The last picture I want to share is from the Lunar Eclipse on 4/15/14.
Jason and I went out foreground hunting, which ended up being a difficult challenge because the moon was almost at its highest peak in the sky.  Jason knew of a few buildings near downtown Georgetown and we found a cool looking old steeple.

We hung out and shot for a while, and Jason took a time-lapse.  It was beautiful to witness in person, and I recommend that everyone should try to see the next one in mid October. 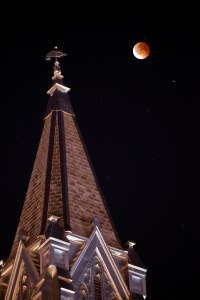