My last post talked about how I have been trying to explore the terrain of my local area, instead of just traveling a distance for obvious pretty places.  I have been keeping this up, and in the last week I have been to a number of new places that I found through the use of google maps and hiking through woods.  I want to share a couple of these pictures and places with you, in hopes that it might motivate whoever reads this to explore the unknown beauty of their own area.
I have spent a lot of time traveling and looking for Bald Cypress trees, one of my favorite trees because of its roots, and the fact they like to grow in water.  Usually my search of them has ended me up at the North Carolina coastal areas, but when doing some research and speaking with some park rangers, I was able to find a grouping of Cypress trees that grow beside a stream in the woods in Greensboro, NC (where I live).   It was actually located off of a road called ‘Cypress Tree Park rd’…. and there isn’t a Cypress Park, but it was named many years ago after the Cypress trees before Greensboro had developed.
So yesterday (1/5/14) I decided to check out the spot, and I figured it was a good day to do so because of a fog that started to settle in.  Once I hiked through the woods and found the trees I was looking for, I began to think about composition and lighting.  I knew in the composition I wanted to show the Cypress roots, and the ‘Cypress knees’ that were starting to grow in the area.  These Cypress knees are the young growing Cypress trees, which are unusual looking and I love photographing them!

Now I only had to think about lighting.  After shooting for about an hour and unpleased, the sun started to set and the tungsten street lights turned on.  I noticed that when this happened, the orange street lights lit up the fog behind the trees, and the light from the sky was still enough to have the correct color and detail on the trees themselves.  Heres the first frame that I set up: 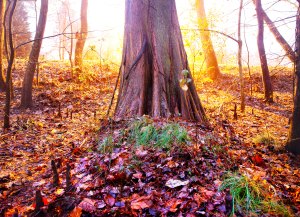 As the sky became darker, the sky became more tungsten, and I decided to use this golden look to my advantage and get a reflection shot.  Being that it was starting to get very dark, I needed to utilize the light as best as I could…and so I put the camera on my tripod and used my ‘2-second-timer’ (helps avoid camera shake from pressing the shutter button) to take a 20 second exposure.  At this point, my shoes were already filled with water and mud, so I decided to just stand in the water as I took this picture. 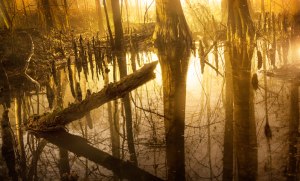 Besides Cypress Park rd in Greensboro, I figure I will also share a couple of the other places and pictures that I have been to recently.

I went back to deep river a couple days ago to check out some of the runoff ponds. (High Point NC) 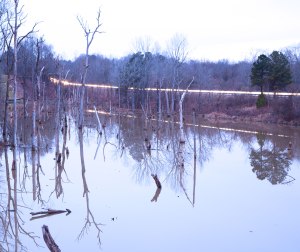 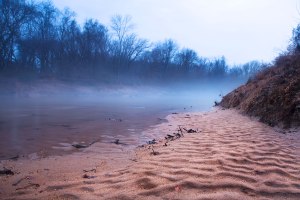 And last week I also found myself photographing a group of deer, notice the one dear shaking off the rain (Smith Mountain Lake, VA.)

One thought on “Exploring my local area”