By now, many of you have probably seen North Carolinas iconic picture of the car on fire in Raleigh because of the recent snow.  Well if you haven’t, it is a picture of the snowy highway near Raleigh with about 30+ cars slid off to the side and one car in the distance on fire.  This was a real picture, and it shows how bad southerns are at handling snow.  In parts of NC it snowed up to 12 inches, and where I live received 8.

This first picture I want to share is of my pet rabbit having his first playtime in heavy snow!  At first he was a little worried about it, but quickly started having fun by creating tunnels.

Now that I have showed the fun side of the snow, here is a little more of the ‘mess’ created by people trying to drive

And finally, I found someone with some real genius!  I saw this guy walking and I had to get a picture.  He had on cleats for traction in the snow, and the plastic box keeps the snow off of his head but can also double as a sled! 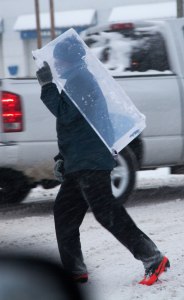 And heres a timelapse I created from the event